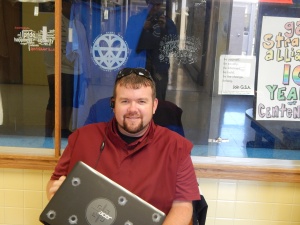 His name, Jeremy Benton. He is a hall monitor at Centennial High School. I asked him a few questions about the life of a hall monitor. I found out from this experience that Hall Monitors are in fact people too.

The first question I asked him was about the salary for an average hall monitor. He said “Usually minimum wage, but I make a little bit more because of the experience I have at Centennial.”

My next question involved an answer in which only Benton could provide. I asked what his duties were as a hall monitor. His response, “To protect the lives of Centennial Students.” He also fills in for other monitors if they are on or requesting a break from being a savior in our halls.

Finally, I asked what some things he could change about being a hall monitor. He was quoted as saying ” I would change the kids attitudes. Some are disrespectful,  conduct themselves with poor manners, and just plain rude.”

From this interview, I gained knowledge of what a hall monitor is really like. Also, it takes a special kind of person to become a hall monitor. Just sitting in the chair all day, nothing to do. But they are people and they have feelings. even if they just sit there, watching our every move. They all keep us safe, so here is a thank you to all of the Hall Monitors in CHS.

The future of education is rolling desks.